It's nothing personal. I'm just…

“It has been said that to write is to live forever. The man who said that is now dead.”

The album in a nutshell: It says a lot that despite being the only female, Hayley Williams sounds like she’s got the BIGGEST BALLS in the band. Step aside world, for Hayley is back. & she is unstoppable.

Let’s just get one thing out of the way: Brand New Eyes is not better than RIOT!, nor is it as good as RIOT!. 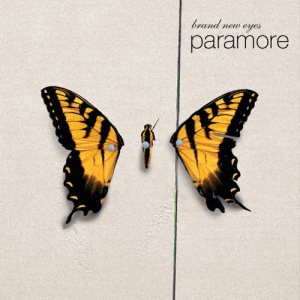 But it does not disappoint. Oh hell no.

Apparently title-written in all-lower-cased for a reason (‘brand new eyes’ as opposed to the shouting upper-cased ‘RIOT!’), Paramore‘s 3rd album has been long-awaited by us fans, with ludicrously high expectations to meet after the monstrous success of their previous album, RIOT! & all the Twilight-huha over “Decode”. As a fan, I find writing a justified review a tough attempt. As much as I want to proudly declare it as “THIS IS DA SHIT!”, the honest fact is, it is not. But do not fret, all my fellow Paramore fans (& for those ignorant ones who have yet to receive the gift of appreciation of this band), for Brand New Eyes still is, at the end of the day, a must-have. 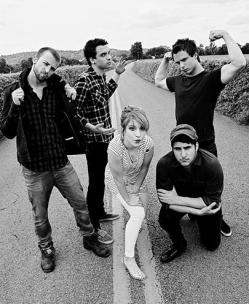 The moment the 1st track, “Careful”, hits you full in the face you will smile in relief – oh yea, Paramore has not lost any mojo all right. Downright catchy, melodious & aggressive, with some rather neat instrumental riffs, it kicks off the album nicely. The momentum is continued with the boundless energy of “Ignorance”. Though it follows the same aggressive punch formulae of previous hits “Emergency” & “Misery Business”, after a couple of listens, I have to admit the 3-part strong sequences used (also for other tracks in this album) of verse>pre-chorus>chorus become a little tiresome, especially without any particularly memorable melodies. Nevertheless, “Ignorance” has Hayley jumping out & kicking your ass off the floor to start head-banging. “Playing God”, the 3rd track, is pop-easy on the ears (but with some rather confrontational lyrics though!). Track 4, “Brick by Boring Brick” followed subsequently by “Turn It Off” are the most radio-ready tracks, seeing Paramore at its endearing pop-rock best.

The problem is, with the album starting off quite brilliantly (& safe, which is not entirely bad) with the first 5 tracks, things go downhill after that. Paramore slows things down with the odd-one-out acoustic “The Only Exception”, & I’ve never thought any Paramore song could put me to sleep & sound almost uninspired, but here it is. It does not get better when tracks 7 to 9 follow, because I felt I was listening to the same song over again for 3 times. It  does not help that these 3 tracks used the same tonic chord. Quite frankly, this resulting sequence of tracks 6-9 is the sort of thing all original-CD buyers (especially long before the illegal downloading era began) feared the most – purchasing a CD that is half-filled with awesome tracks, & the other half muddled with fillers.

Another acoustic track, “Misguided Ghosts” fills slot no.10, & though it did not lift my mood after the dreaded tracks 6-9, at first listen it sounded like Paramore was trying something different too hard. In fact, it doesn’t even sound Paramore-ish, more like something an under-rated indie artist would do. Given a few more listens, the sensitive poignancy of the song surprisingly grew on me, & the subdued guitar progressions that complemented each other were quite beautiful.

All is forgiven when the final track, “All I Wanted” arrives. I almost cried in relief! Paramore is back! “All I Wanted” is almost epic-like, closing the album in the most glorious of ways, not unlike what “My Heart” did for All We Know is Falling. For me, Paramore stands out among the other bands for some particular reasons: They sound phenomenal live or acoustic, & Hayley Nichole Williams – unbelievable vocals & hotness. Well, you will be glad to know Hayley not only sounds spectacular in this album, miraculously, she seems to be getting even better! Which seems to be a rather unfortunate thing; the undeniable fact that this album showcases the unstoppable talent of Hayley, while her bandmates look set to continue playing the supporting role. Not necessarily such a bad thing, because Josh, Zac, Jeremy & Taylor are  really perfect behind Hayley. Notably, Zac tries really hard this time with more authoritative, almost individualistic drumming, but it’s really no fault of the guys that they get overwhelmed by Hayley’s vocal range & power. She is just that good.

You did not hear me wrong, she really does sound like she’s got the biggest balls in the band.

Yup, that one is on her way to being the ultimate frontwoman. She completely blows us away, singing her heart out track after track. I love the chilling brilliance of her vocals even during the low quiet parts of “Brick by Boring Brick” & the 1st chorus of “All I Wanted”, all the way to the climax of “All I Wanted”, when all the instruments die out for her to hit the final chorus in full glory. If you want a prime example of Hayley’s breathtaking vocal prowess, that 8-second ecstasy is the one for you. I bet the members of the Facebook group ‘When Hayley Williams sings those high notes, I cream… seriously’ would be bloody damn proud.

On another note, the sound recording for this album, just like RIOT!, is almost flawless, coming off as very polished, almost too much. One thing I did not enjoy however was the amount of vocal layering (or whatever you call it) used notably during choruses. Hayley has a standout voice & layering her vocals to 3-5 Hayleys at one go just mutes the full experience. The songwriting has glaringly matured. The tracks are filled with pretty aggressive, cynical & brutally personal lyrics, most of them blatantly relating to all the almost-broke-up drama the band was undergoing while undertaking this album. 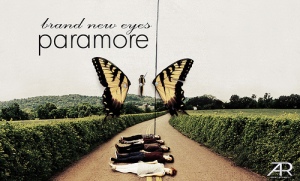 Alas, Brand New Eyes is really a neat album, but not enough to substantiate the full potential of Paramore. It lacks the outstanding endearing melodies of “Misery Business” & “That’s What You Get“ & is halfway drowned by a couple of fillers, but significantly displays a more mature growth of Hayley & her bandmates. & all this while Hayley seems to be getting hotter than ever! Like I said, the album still manages not to disappoint. In fact, more importantly, this record not only justifies Paramore’s sky-rocketing rise, it shows that Paramore is certainly special (credit enormously to Hayley) & has an enormous load of potential & talent still waiting to be unleashed.

In other words, Brand New Eyes has Paramore saying “Hey, we are back!!! We are not just passing by, we are here to stay. & you know what? You have not bloody seen the best of us, yet.”

So while I struggle to construct words to conclude this latest Paramore effort, I came across this review on 411mania.com which had this to say: “Paramore is a band that realize they’ve a chance to make it and they’re looking to make the most of it with Brand New Eyes, & they’ve just a smidgen more ambition away from doing just that. Quite simply, it’s just a question of whether the boys have the balls to join Hayley on their inevitable ascent further up the pop rock ladder.”

Say what you like, but you can’t deny it really is all, ALL, about Hayley Williams. At this rate, only a sore throat could stop her. 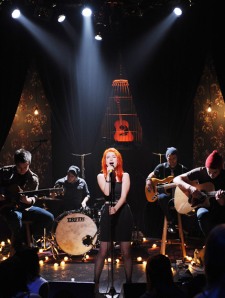